A sketch map for Unter-Schweingau

The result of about an hour's fiddling with GameMapr. Actual terrain is free to vary as those setting it up see fit, but this should give a general idea of the battlefield. A pass amongst hills, with a central road leading through the town and off to the river crossing. Murdock/Jeff, feel free to add another river crossing if you think it needs it, for easier troop movement or scenario challenge. Adjust the road if need be, too. Such scouting sketches are, of course, notoriously unreliable. ;) 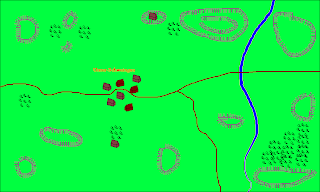 Click on the image for larger view.
Posted by Snickering Corpses at 6:36 PM 13 comments:

Rumors spreading from the Landgrave of Ober-Schweinsberg speak of the impending meeting of the council loyal to Prince Asgar, one of the competing brothers engaged in civil war over their deceased father's throne. The Landgraviate continues to be divided over the issue of succession, with each Prince having been crowned Landgrave by different bishops and supported by their own government structures.

Speculation runs high that this gathering of Asgar's Council will draw the attention of Prince Arnold, and that an expedition may be mounted despite the winter season to arrest the Council members. Already, some residents are reported to be leaving the small town of Unter-Schweingau in anticipation of bloodshed, while others stay, the mayor having called the town's militia to arms. As of yet, there is no word of the Council's arrival in the town, and rumors differ as to the exact date planned for the meeting.

It is thought that any move by Arnold's wintering forces will result in a battle of some size, as one of Asgar's divisions lies in winter quarters across the river from the town, and would likely be called upon to defend the town.

(and yes, this is a background post for the proxy battle I'm working up to be played out by Murdock's group)
Posted by Snickering Corpses at 6:40 AM 3 comments:

See the Hesse-Engelburg blog for details....
Posted by Snickering Corpses at 7:05 PM No comments: